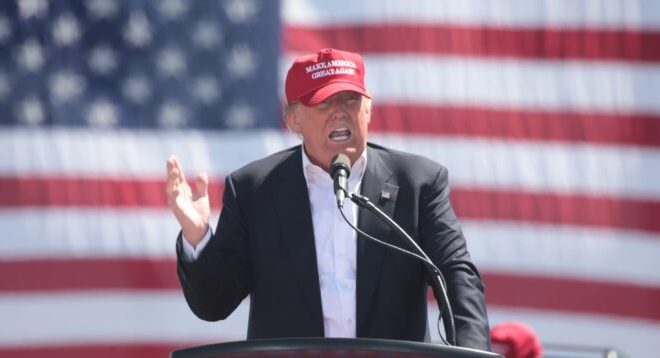 President Donald Trump issued a statement on Tuesday that cuts to the core of a national debate about Georgia’s election law.

“Far too many days are given to vote,” he continued. “Too much ‘mischief’ can happen during this very long period of time. You saw that in the 2020 Presidential Election. How’s Ruby Freeman doing?” he added.

“Governor Brian Kemp and Georgia Secretary of State should have eliminated no-excuse, widespread mass Mail-in Voting, gotten rid of the dangerous and unsecure Drop-Boxes, and should have kept and EXPANDED Signature Verification to do matches against the historical voter file, among other things! Hope the RINOs are happy,” he continued.

“Kemp also caved to the radical left-wing woke mob who threatened to call him racist if he got rid of weekend voting,” Trump concluded. “Well, he kept it, and they still call him racist!”

Georgia recently became the focus of national attention as the MLB Commissioner Rob Manfred joined over 200 companies’ CEOs in opposing election integrity laws like Georgia’s and Texas’s. The MLB is moving the All-Star Game to Colorado, which has stronger election laws than Georgia in several ways.

Texas recently passed an election integrity law. Governor Abbott, whose state recently hosted a 100% full Texas Rangers game, stated on Tuesday he would not accept MLB’s All-Star Game in his state even if it had been offered.

Related Items
USA First Reporting
← Previous Story Of States with the Most New COVID Cases Per Capita, 9 Out of 10 Are Run by Democrats
Next Story → Biden Says Americans Who Get Vaccinated Can Celebrate the 4th of July, ‘You’re Able to Get in the Backyard with a Group of People Because You’ve Been Vaccinated’ (VIDEO)
Subscribe
0 Comments
Inline Feedbacks
View all comments