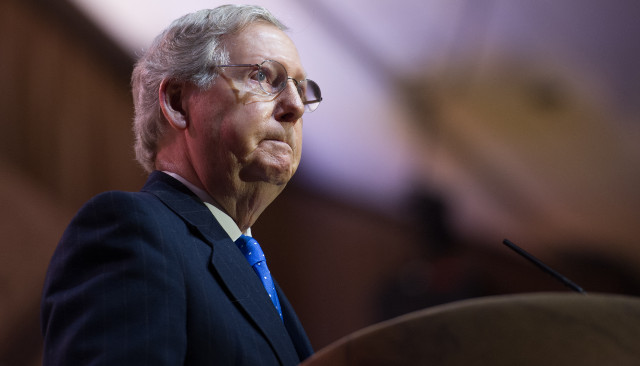 Recently, Sen. Mitch McConnell’s GOP Establishment allies have been running off to the MSM and complaining about Sen. Rick Scott’s tactics in the runup to the 2020 midterms, playing buddy-buddy with the leftist-controlled media and complaining about the more conservative members of the GOP. Simultaneously, the incredibly wealthy (thanks in no small part to his involvement with a CCP shipping company) Senate Minority Leader is saying that Sen. Rick Scott should fund the NRSC with his own funds. It must be too much to ask Cocaine Mitch to sell his Chinese company and help fund a GOP victory himself.

Well, while the actual conservatives within the GOP might have put up with such behavior from the RINOs in the past, now they’re no longer willing to. So, rather than tamely giving up or going along with what the RINOs want, Sen. Scott sent out an excellent, powerful letter to the NRSC. In it, he issued a scathing rebuke to those RINOs that worked with the “vultures in the left-wing media.” Slamming those RINOs in quite strong language, Scott went on to call them traitors, saying:

“As always, they are being aided by the typical Washington ‘anonymous sources’ whose cowardice is only exceeded by their ignorance. … any so-called Republican who aids and abets the enemy is in fact trying to defeat Republican candidates and is a traitor to our cause. But these small people will not win.”

Here’s that letter in full:

As you can read in it, Sen. Scott sounded off on those RINO traitors and their friends in all of the worst, farthest left outlets out there, saying:

“As is predictable for this time of year, the vultures in the left-wing news media — The Washington Post, NY Times, CNN and the like — are roaming about trying to divide and defeat Republicans. As always, they are being aided by the typical Washington ‘anonymous sources’…”

And why are they doing so? Because the media hacks are frightened of a GOP victory that means something and the RINOs within the GOP don’t want to see more populist, MAGA candidates win.

But that wasn’t all. As you can also read in the letter, Sen. Scott didn’t just attack the RINOs. He also defending what the NRSC has so far spent on and highlighted how it has propped up candidates and kept fundraising levels up. In his words:

“In addition to providing our candidates with polling, data, assistance to win the Hispanic vote and many other services, the NRSC spent over $45 million dollars in advertising prior to Labor Day. This is crucial to taking the majority, and it is working, with all our candidates in the hunt. None were left for dead, and every Democrat we are targeting is under 50 percent in polling today.”

[…]The NRSC helped our candidates with early ads, and we’re proud that nearly every candidate ad that was on the air this summer had assistance from the NRSC. We will continue to do this through election day.”

Concluding his excellent letter, Sen. Scott ripped into the RINOs and how they’ve wasted victories in the past, calling on people to donate to help real conservatives win. In his words:

“[D]oing things the same way will not get you a different result. We need a different result this time — we need a Republican majority in the Senate and House or else we will continue to get more federal debt, trillion-dollar deficits, open borders, a woke military and rampant crime. Things must change. Thank you for all you do — please donate more if you can — on to victory!”

We’ll see what happens. The conduct of the RINOs so far makes it seem unlikely that the average MAGA Republican is that excited about voting for some senator that will just let them down all over again, much less donate to such people. But maybe Sen. Scott’s strategy will work.

Related Items
USA First Reporting
← Previous Story Unbelievable! This is the Leading Cause of Death in the US Army
Next Story → Trump Hints At What Documents He Had At Mar-A-Lago