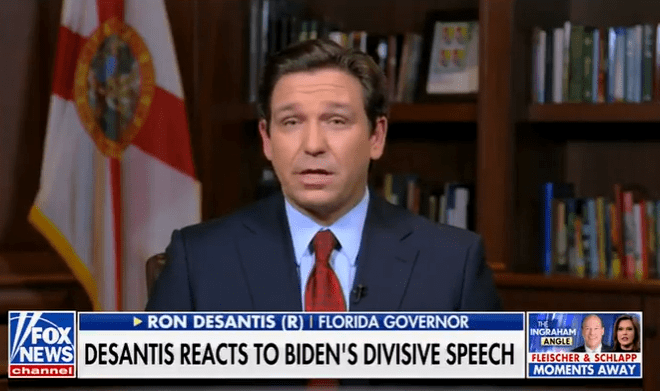 BOOM! DeSantis SHREDS Biden’s Hateful Speech ‘One Of The Most Disgusting Speeches An American President Has Ever Given’ [VIDEO]

On Wednesday, the President delivered a Hitler-esque speech with Marines in the background where he called all Trump supporters a threat to Democracy and to our country.

On Friday, Biden walked back his extreme statements, saying that he doesn’t ‘consider any Trump supporter a threat to the country.’

Already, Biden has received immense backlash for the speech for his politicization of the military and the speech’s authoritarian rhetoric and aesthetics.

Florida Governor Ron DeSantis gave one of the best responses to Biden’s speech so far.

DeSantis called Biden the ‘American Nero’, an analogy to a late Roman emperor who oversaw the decline of the empire.

He also said that the speech was “One of the most disgusting speeches an American President has ever given.”

Republicans need more decisive leaders who will call out the extreme rhetoric of Democrats.

Senate Minority Leader Mitch McConnell (R-Ky.) has not publicly commented on the speech that called the vast majority of Republicans a threat to Democracy.

[Biden’s Speech] “Was one of the most disgusting speeches an American president has ever given. He ran as being a unifier, and he’s basically saying to the vast majority of the country that disapproves of him that they’re effectively a threat to the republic. He dodders, he lashes out. But at the end of the day, his policies are why there’s so much opposition to him.

He came in and he opened the border, and we’ve seen what a disaster that’s been. He kneecapped American energy. We’ve seen how that’s hurt millions and millions of people across our country. They’ve inflated the currency. We have one of the worst inflations we’ve had in over 40 years. So of course, people are going to be upset at all the wreckage that he’s left in his wake. He is the American Nero. He’s a failed leader.”