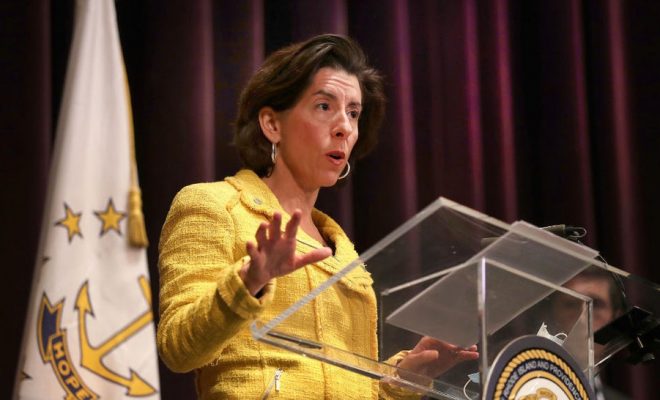 On Wednesday, Biden Administration Commerce Secretary Gina Raimondo stated, “There is not a shred of evidence to show that the [Trump tax] cuts in 2017 increased growth or productivity.”

The Heritage Foundation explained, “In December 2017, Congress passed a $1.5 trillion tax cut to spur business investment, support the long-running post-financial-crisis economic expansion, and simplify taxpaying. The primary permanent component of the TCJA is the 21 percent corporate income tax rate. The law lowered the federal rate from 35 percent, which had made America one of the highest corporate-income-tax countries in the world. The lower rate was paired with business expensing, allowing businesses to write off the full cost of investments through the end of 2022. These two provisions were the primary driving force behind projections of increased economic growth.”

There may be disagreements about whether the tax cuts increased growth and productivity, but it is a wild statement to aver that there is “not a shred of evidence.” The Heritage Foundation noted last month:

A new Heritage Foundation report chronicles how the tax cuts were a success on each of these margins. Following the tax cuts, the Congressional Budget Office projected a sustained increase in business investment. Through 2019, actual investment outpaced the government scorekeeper’s projections. Tax cut-driven turnaround in investment also showed up as a spike in new manufacturing orders, small-business optimism, and new-business applications. Those forces helped boost gains for workers.

New job openings surged in 2018, the year following the tax cuts, and about 83,000 more people voluntarily left their jobs for better opportunities at the end of 2019, compared with the pre-reform trend. The beginning of 2018 also marked a significant increase in wage growth. The accompanying chart shows that for production and nonsupervisory workers, nominal wage growth was 2.4% and declining in the years leading up to the tax cuts.

Following the tax cuts, wage growth for those workers increased to 3.8% by October 2019, according to data from the Bureau of Labor Statistics.

The House Ways and Means Committee stated last October that the tax cuts had been successful:

In the third quarter of 2018, small businesses recorded their highest level of optimism to date. The unemployment rate reached a generational low, with record low unemployment for women, people of color, and workers without high school degrees. Since the enactment of TCJA, the economy gained nearly 5 million jobs before the pandemic. Under TCJA, job openings were at a record high of 7.5 million jobs.

Conversely, Business Insider argued the tax cuts were not very successful, “There were short-term bumps in GDP growth and business investment that faded relatively quickly. Wages increased, but not to the extent Republicans promised. US GDP ticked upward in the early months of 2018, helping the economy achieve 3% growth during the first year of the law, an early success for it. However, that momentum slowed in 2019, the product of anxiety among business leaders on Trump’s trade wars and weak demand overseas.”

Gina Gina bobina fe fi fofina it’s Gina! Like most of this administration flunkies hasn’t got a good functioning brain ever apparently. She should explain just how nice her bank account was then. Oh but wait hers is probably a lot better now since she signed back up with this satanic administration!