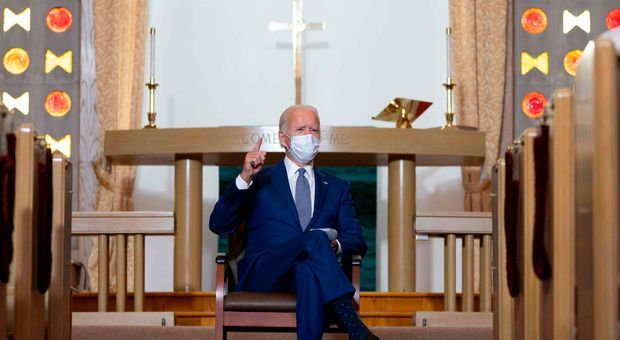 If you ever doubted that the radical left is waging a war against religion, this may be all the proof you need.

Joe Biden has “removed” any reference to God from his proclamation of a National Day of Prayer.

Prayer, of course, is defined as a “solemn request for help or expression of thanks addressed to God.”

So… how can you have a National Day of Prayer without God?

He is the first modern president to proclaim a National Day of Prayer without acknowledging God in any way.

More details on this stunning development below:

You can read Joe Biden’s statement, which does not mention “God,” below:

This makes us wonder: Was this Joe’s idea? Or did he bow to the radical left?

Either way, it is definitely not a good look for the White House, especially since we are supposed to be “one nation under God.”

Just the News has more details on Biden’s curious statement:

President Biden has issued a National Day of Prayer proclamation in which the word “God” does not appear once.

“I invite the citizens of our Nation to give thanks, in accordance with their own faiths and consciences, for our many freedoms and blessings, and I join all people of faith in prayers for spiritual guidance, mercy, and protection,” Biden says in the proclamation.

The lone use of the word “Lord” appears only once at the conclusion of the declaration as it pertains to the date: The word appears within the boilerplate phrase “in the year of our Lord two thousand twenty-one.”

The phrase “the divine” comes up in a quote that is attributed to the late Rep. John Lewis: “Nothing can stop the power of a committed and determined people to make a difference in our society. Why? Because human beings are the most dynamic link to the divine on this planet.”

In contrast, former President Donald Trump mentioned God about a dozen times in his final National Prayer Day proclamation last year.
David Brody, host of The Water Cooler inquired, “How do you release a proclamation about prayer and not mention God at all?”

In terms of religion, Biden has been in the news lately.

Because Biden is pro-abortion.

It appears that Biden’s Catholic faith is coming under heavy scrutiny from all sides.

Of course, the only major national news outlet to confirm this story was Fox News:

Like his predecessors, President Biden issued a proclamation on the National Day of Prayer this week, but one word was missing.

Both former presidents Barack Obama and Donald Trump mentioned “God” in their National Day of Prayer proclamations, but Biden’s proclamation never mentions God, only Americans’ “many religions and belief systems” and the “power of prayer.”

“Throughout our history, Americans of many religions and belief systems have turned to prayer for strength, hope and guidance,” Biden’s proclamation reads. “Prayer has nourished countless souls and powered moral movements – including essential fights against racial injustice, child labor and infringement on the rights of disabled Americans. Prayer is also a daily practice for many, whether it is to ask for help or strength, or to give thanks over blessings bestowed.”

“Let us pray for the police officers, firefighters and other first responders who put themselves in harm’s way every day to protect their fellow citizens,” he said. “And let us ask God for the sustenance and guidance for all of us to meet the great challenges we face as a Nation.”

You know things are bad for Biden when even Barack Obama referenced “God.”

If Obama referenced “God” but Biden refuses to, that gives you an alarming look at the state of the country today.

At We Love Trump, we proudly proclaim:

May God continue to always bless the United States of America!