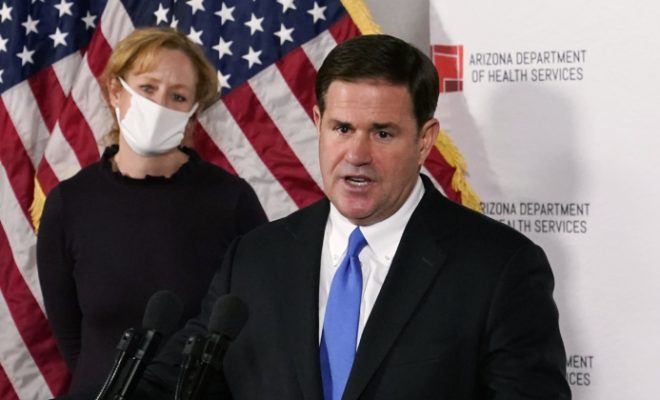 The measure, Arizona Senate bill 1003 (S.B. 1003), was approved earlier in the state legislature in party-line votes.

The new law codified a ruling by the U.S. Court of Appeals for the Ninth Circuit on Oct. 6, 2020, within one month of the 2020 election. It also ended disputes over unsigned mail-in ballots between the state Republicans and Democrats.

Current Arizona law allows election officials to contact the voters to fix the signatures on the ballots if the signatures don’t match other signatures from records in the Department of Motor Vehicle, voter registration forms, or previous early ballots. The voters can fix the signatures, if they failed to pass the verification process, within up to five business days after election day.

The new law didn’t change anything about the grace period for the signed ballots.

However, it ended the state Democrats’ efforts to add a similar grace period to unsigned ballots.

Before the 2020 election, Arizona Secretary of the State Katie Hobbs—a Democrat—was trying to set a five-business-day grace period for the voters to fix the ballots if the ballots are not signed.

Hobbs’s move is part of the efforts to honor a settlement in 2019 with the Navajo Nation, which allows Navajo voters with mismatched or missing signatures on mail-in ballots to correct their ballots with five business days after the election day.

However, the efforts were stopped by the appeal court judges who said, in alignment with the state Republicans, that the Democrats went too far by giving absentee voters five days after Election Day to correct missing signatures on mail-in ballots.

“All ballots must have some deadline, and it is reasonable that Arizona has chosen to make that deadline Election Day itself so as to promote its unquestioned interest in administering an orderly election and to facilitate its already burdensome job of collecting, verifying, and counting all of the votes in timely fashion,” the appellate court said.

The new law codified the appeal court’s ruling by adding an amendment to the current Arizona election law.

The amendment requires all mail-in ballots to be delivered to the county recorder, other officers in charge of the election, or polling sites no later than 7:00 p.m. on election day.

“The ballot will not be counted without the voter’s signature on the envelope,” read the amendment.

Meanwhile, another amendment in the new law required election officers to contact the voter if the signature is missing on the ballot. The deadline for adding a signature to a ballot should be no later than 7:00 p.m. on the election day.

The Epoch Times reached out to the Navajo Nation for comment.

The Native American territory had urged Ducey to veto the bill before he signed it. Navajo Nation President Jonathan and Nez and Vice President Myron Lizer said it will undermine the 2019 settlement.

“The Navajo Nation is extremely disappointed in the actions of the state legislators who voted in support of S.B. 1003,” Nez said in a statement (pdf) on April 30. “We strongly urge Gov. Ducey to stand with Navajo voters by vetoing S.B. 1003.”