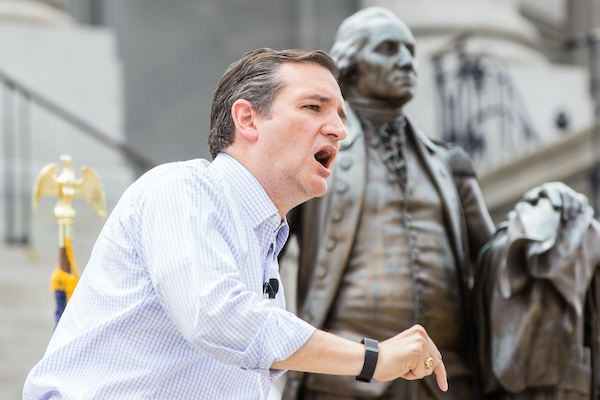 During an appearance on the podcast “Ruthless,” Republican Senator Ted Cruz ripped the anonymous source who leaked his wife’s texts to the New York Times about his trip to Cancun.

The comments came in response to backlash Cruz faced after he took his family to Cancun while his home state of Texas was destroyed by a winter storm and blackouts. Cruz was initially hit hard with fierce backlash from Democrats as well as Republicans which got even worse after two anonymous sources leaked his wife’s texts to the New York Times.

“Yeah, I will say Heidi is pretty pissed at that,” Cruz said. “It’s a sign of how ridiculously politicized and nasty and just, you know, here’s a suggestion: just don’t be a**holes. Treat each other as human beings. Have some degree, some modicum of respect.”

Last week, Heidi Cruz encouraged her neighbors to join her family in Cancun at a resort they had stayed at “many times.”

The New York Times reports on the matter: “Text messages sent from Ms. Cruz to friends and Houston neighbors on Wednesday revealed a hastily planned trip. Their house was “FREEZING,” as Ms. Cruz put it — and she proposed a getaway until Sunday. Ms. Cruz invited others to join them at the Ritz-Carlton in Cancún, where they had stayed “many times,” noting the room price this week ($309 per night) and its good security. The text messages were provided to The New York Times and confirmed by a second person on the thread, who declined to be identified because of the private nature of the texts.”

After receiving harsh criticism, Cruz admitted that the trip was a “mistake” and he returned back to Texas on Thursday.

Check out what The Daily Wire reported:

After catching a flight back to Houston on Thursday, Cruz addressed the backlash with reporters outside his home. “We left yesterday, the plan had been to stay through the weekend with the family,” he said, referencing how the last week “has been tough on a lot of folks” and recounting how his family had been reduced to clustering around the fireplace after they lost power.

When his daughters found out that school had been canceled for the week, Cruz explained, they suggested taking a vacation. “They said, ‘Look, why don’t we take a trip? Let’s go somewhere where it’s not so cold.’”

Cruz admitted, however, that his doubts about taking a vacation began immediately. “I have to admit, I started having second thoughts almost the moment I sat down on the plane,” he said. “Because, on the one hand, all of us who are parents have a responsibility to take care of our kids, take care of our family. That’s something Texans have been doing across the state.”

What are your thoughts? Let us know in the comments below!

The media needs to stop picking at people! They need to look into their own closet and see what themselves have done as a disservice to the USA. One day it will come back to haunt them. Senator Cruz shouldn’t need to apologize for trying to keep his family safe. His job is to go to Washington to vote for the people of the state of Texas. People are entitled to some time off. It’s my understanding he left his family there and flew back. He should not cave and be apologetic to anyone, you do it once, and they’ll keep finding more to pick at! Stand your ground Cruz!

This is no ones business! Mr and Mrs Cruz are people, and parents and yes! A Senator but he has the Right to Private time with his family! I’m sure many Texans bailed out of the Winter Wonderland. The media needs to mind their own business! OR better yet! Find out what and when N Pelosi KNEW our Capital was going to be raided! AND WHY didn’t she accept Trumps offer for National Guard. There MUST BE ONE RESPECTABLE JOURNALIST LEFT IN THE USA…Somewhere…