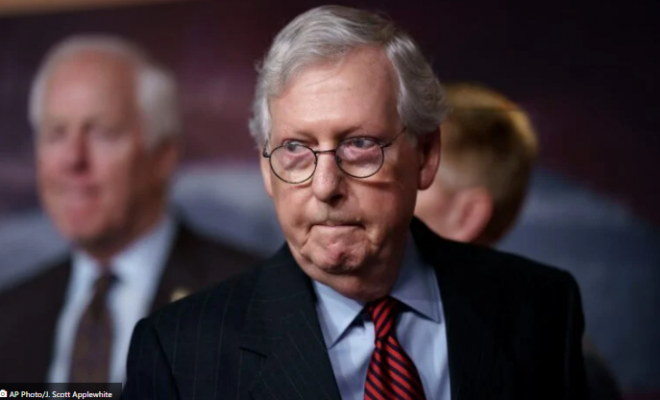 Senate Minority Leader Mitch McConnell has reportedly been speaking ill of former President Donald Trump, according to one of his 2020 campaign officials.

One-time Trump campaign manager Brad Parscale took to Twitter Wednesday to share a report from Kentucky.com regarding comments that the GOP Senate leader allegedly made about the former president.

McConnell reportedly said that the Republican Party was moving away from Trump and that he was not a threat, personally, to him or his position as GOP Senate leader

“Trump is fading vs McConnell’s Republican party? McConnell might want to get out of Washington soon. Kentucky would choose Trump over McConnell in a heartbeat. #swamp,” Parscale tweeted, referencing the Washington, D.C. political “swamp” Trump often vowed to “drain” when he ran for president in 2016.

Senate Republican Leader Mitch McConnell believes the Republican Party is moving away from Trumpism and views the former president as a weight on his chances of reclaiming the majority next year.

“There is a clear trend moving” the party away from Trump, McConnell said, according to the book’s authors.

“Sucking up to Donald Trump is not a strategy that works,” he reportedly added.

“The only place I can see Trump and me actually at loggerheads would be if he gets behind some clown who clearly can’t win,” McConnell is also quoted as saying in Peril, regarding Trump’s endorsement of candidates ahead of the 2022 and 2024 elections. “To have a chance of getting the Senate back, you have to have the most electable candidates possible.”

Newsweek added that McConnell’s comments were allegedly made earlier this year, but recent polling shows that Trump retains a commanding presence within the GOP and in fact, a new survey from Rasmussen Reports, one of the most accurate polling firms spanning at least the past two presidential election cycles, has Trump trouncing President Joe Biden in a rematch.

“Rasmussen Reports, one of the country’s most accurate pollsters, shows that should Trump choose to run again in 2024, he would obliterate Joe Biden by a margin of 51 to 41 percent,” Breitbart News reported Thursday.

But since the Jan. 6 Capitol Building breach, which Democrats and Trump’s opponents have falsely called an “insurrection,” McConnell and the former president have been at odds after Trump endorsed McConnell during his trouncing of Democratic contender Amy McGrath in deep-red Kentucky last year.

In February following the Jan. 6 riot at the Capitol Building, McConnell said Trump was “morally responsible” for it, blaming his rhetoric and accusations that the 2020 election was rigged against him. Also, he called Trump’s actions “a disgraceful, disgraceful dereliction of duty.”

In May, the Senate’s GOP leader appeared to say that the party was shifting away from Trump again.

“We’re looking to the future, not the past, and if you want to see the future of the Republican party, watch Tim Scott’s response to President Biden last night,” the Kentucky Republican said after Biden’s State of the Union Address.

As for Trump, he hasn’t held back on McConnell.

“I have quietly said for years that Mitch McConnell is the most overrated man in politics — now I don’t have to be quiet anymore,” Trump said in August.

And an eyebrow-raising Wall Street Journal story claimed that Trump may be working behind the scenes to help oust McConnell.

“Mr. Trump has spoken recently with senators and allies about trying to depose Mr. McConnell and whether any Republicans are interested in mounting a challenge, according to people familiar with the conversations,” the paper reported. “The discussions risk driving a wedge deeper between the most influential figure in the Republican Party and its highest-ranking member in elected office.”